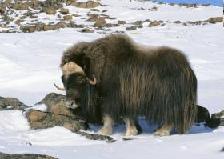 Silence. After the familiar "beep-beep" indicating time's up, Alex answered, "The Musk Ox. My favorite animal." Too bad none of the players were knitters, because while I can't claim the musk ox is my favorite animal, I can easily claim qiviut is my favorite yarn. And therefore know exactly what a musk ox looks like.

I feel in love with qiviut several years ago during a trip to Alaska. In downtown Anchorage it was impossible to miss the Little Brown House with the musk-ox mural that houses the Oomingmak Musk Ox Producers' Co-operative. Over an hour later, my husband had to drag me kicking and screaming from the store. I had become quite attached to several skeins of the expensive yarn, but cashing in our plane tickets home would have been required. After parting with just one two ounce skein, I vowed to research other animal fibers. Perhaps other similarly luxurious yarns existed?

I continued my fiber exploration by visiting a nearby Alpaca farm. On the way to visit family, I had often passed this farm and hollered to my husband, "Look at the llamas!" Alpacas, which are relatives of the camel, were a cherished treasure of the ancient Incan civilization. Once available only to royalty, the alpaca fiber is thicker and heavier than wool but still incredibly soft. Alpacas were first introduced in the United States in 1984 and have been gaining in popularity ever since. 100% Alpaca is a joy to knit with and I still treasure my scarf knit from the yarn I purchased that day

Not many people purposely plan their vacations near Cashmere goat farms, but that is exactly what I did. I approached the Massachusetts' farm with dreams of knitting a buttery soft sweater and having a great story to go with it. It doesn't come any softer than cashmere. Only a few ounces can be obtained from the undercoat of each goat, which is why the fiber is so expensive. But all I had to do was touch the 100% cashmere yarn and I was sold. Thank goodness the farm accepted American Express -- I went home with everything but a goat.

I am continually on the lookout for new fibers. The modern synthetic yarns are amazing, but there is something satisfying about knitting with 100% natural yarns. They may be susceptible to moth attacks and tricky to wash, but the extra care is well worth it. Now I just have to convince my husband that we should adopt a musk ox, alpaca, and cashmere goat. After seeing our American Express bill, he may be open to the idea.
How do I advertise here?